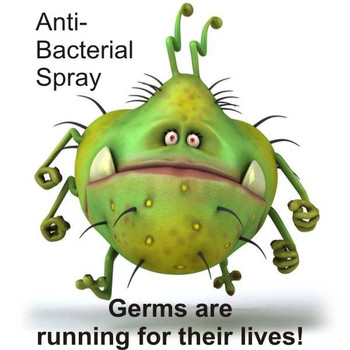 Contrary to what you might think, these natural plant oils are more effective than toxic chemicals at eliminating germs, and they're much safer for you and your entire family! (Have you heard of the serious health consequences associated with most "anti-bacterial" products? )

Our Anti-Bacterial blend is the same one used in a study by French Aromatherapist, Dr. Jean Valnet. Valnet eradicated 206 colonies of bacteria and molds within 30 minutes of spraying this blend in a room. Before spraying the oils he measured the bacteria in an average room and found 210 different colonies, including molds, and 30 minutes after spraying only 4 were still alive!

Of course, the blend smells wonderful because it's a mixture of peppermint, lavender, clove, rosemary, pine, thyme, and cinnamon! Just by inhaling these molecules in the air, your family's immune systems will be strengthened too!! You can spray it in the air, use it in a diffuser or mix it with water or liquid soap for cleaning.

More importantly, you need to be aware that dangerous chemicals, could be in many toothpastes, liquid soaps, hand sanitizers and many other products labeled "anti-bacterial".

The possible dangers that can be associated with toxic chemicals
include:
Endocrine system abnormalities including:
Suppression of thyroid hormone
Estrogen mediated responses (which can increase breast cancer risk)
Weakening of the immune system
Birth defects
Uncontrolled cell growth (i.e. possibly carcinogenic)
Unhealthy weight loss
Liver and kidney damage
Heart and skeletal muscle impaired function
Promoting antibiotic resistant strains of bacteria both in humans and in the environment
Many other possible detrimental effects

In the recent past, the chemicals Triclosan and Triclocarbon were used widely in hundreds of antibacterial products.  These chemicals were recently banned by the FDA as they were shown to be carcinogenic and disrupt muscle function, causing both heart and skeletal muscles to fail.

More importantly, you need to be aware of the fact that there are over 61 million chemicals registered with Chemical Abstracts (CAS), and very few have been studied for their toxic effects.

It is only due to studies like the one performed at the University of California Davis, where mice were exposed to one small dose of triclosan, resulting in heart muscle function being reduced by 25 percent, and grip strength being reduced by 18 percent, that finally prompted the FDA to ban triclosan and triclocarbon.  Researchers also exposed individual human muscle cells (from heart and skeletal muscles) to a triclosan dose similar to everyday life exposure, and this, too, disrupted muscle function and caused both heart and skeletal muscles to fail.

Now that triclosan has been banned by the FDA, any product labeled "anti-bacterial" (except of course those made with non-toxic plant materials) ,from hand sanitizers to socks could be using other chemicals, many of which have not been studied for their toxic and destructive effects.  Unfortunately, many man made chemicals that have been studied have been shown to be toxic to humans.

Even many so-called well known "natural product" manufacturers had previously included triclosan and triclocarbon in their products. Just because a product is labeled "natural" that does not  mean that it does not contain toxic chemicals.

Interestingly, the manufacturers that used triclosan didn't think twice about using it, and may not have researched it's toxic effects.  This is evidenced by the fact that triclosan was first registered with the EPA in 1969 as a pesticide, not something you would want to brush your teeth with, use to cleanse your hands, or put under your arms as a deodorant. Even though registered as a pesticide, it was widely used as an "anti-microbial" pesticide in personal care products and incorporated in conveyor belts, fire hoses, dye bath vats, ice-making equipment added to adhesives, fabrics, vinyl, plastics (toys, toothbrushes), plastics, floor was emulsions, textiles (footwear, clothing), caulking compounds, sealants, rubber, carpeting, and a wide variety of other products.

Triclosan was so pervasive that it had already been detected in the urine of 75% of the U.S. population. The FDA reported that soaps containing triclosan and triclocarbon weren't any more effective than washing with plain soap.

Get our natural plant based essential oil Anti-Bacterial Spray, and rest assured that you are eliminating harmful germs safely! You can spray it in the air, use it as a hand sanitizer or use it for household disinfecting and cleaning.

Please share this information with your families and friends, particularly those that include young children and pregnant women.